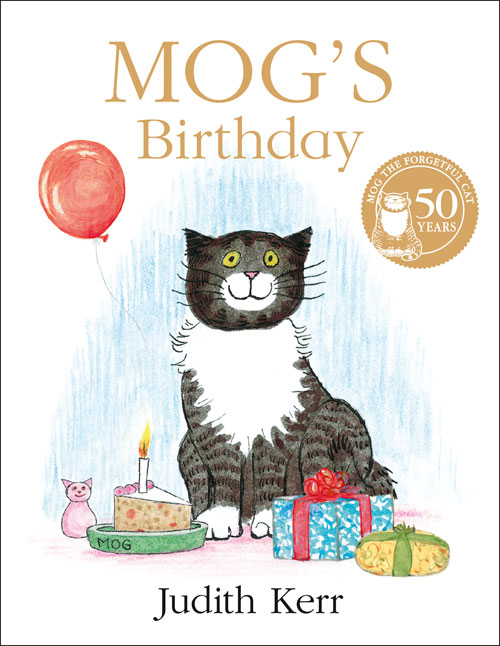 It’s Mog’s Birthday and everyone is excited to celebrate! Everyone except Mog. Mog doesn’t like birthdays or parties and she especially doesn’t like them both together. But will she change her mind when it’s her own special day?

HarperCollins created this special birthday story in collaboration with Judith Kerr, using a selection of pictures from across fifty years of illustrating Mog to bring the delightful story to life. Join us and celebrate fifty years of a really remarkable cat!

Author: Judith Kerr, Illustrated by Judith Kerr
Format: Hardback
Release Date: 03/09/2020
Judith Kerr OBE was born in Berlin. Her family left Germany in 1933 to escape the rising Nazi party, and came to England. She studied at the Central School of Art and later worked as a scriptwriter for the BBC. Judith married the celebrated screenwriter Nigel Kneale in 1954. She left the BBC to look after their two children, who inspired her first picture book, The Tiger Who Came to Tea. Published in 1968 and never out of print in the fifty years since, it has become a much-loved classic and perennial bestseller. Judith was awarded the Booktrust Lifetime Achievement Award in 2016, and in 2019 was named Illustrator of the Year at the British Book Awards. Judith died in May 2019 at the age of 95, and her stories continue to entertain and delight generations of children.

HarperCollins created this special birthday story in collaboration with Judith Kerr, using a selection of pictures from across fifty years of illustrating Mog to bring the delightful story to life. Join us and celebrate fifty years of a really remarkable cat!
Retailers Read more